I milked the goat again tonight. Yes, that is a sentence I never really dreamed I would say, let alone actually do. My dad keeps laughing at the evolution of his “suburban girl gone country” and my daily escapades.

Perhaps you’re thinking “how does one milk a goat?” Yes, I wondered the same thing. Why milk a goat? Well lots of reasons really, but none of which I’ve entirely figured out yet. You can drink goats milk, all animals like goats milk, goat cheese, goats milk soap, the possibilities are endless really. But the reality of milking this animal are far from the picturesque farm stories that one might envision. I perceived that this blessed animal would happily hop up on the little stand, I would gently attach this lovely Automatic Milker I bought on eBay, and gallons of milk would be retrieved. The reality is that this stubborn animal wants nothing to do with being milked, I drag her to the milk stand, attempt to pick up an animal that is the same weight as I am, she kicks at me while I struggle to attach suction tubes that she hates, and then I get … A trickle. Yes, after all the struggle, I literally get a few ounces out of this goat. 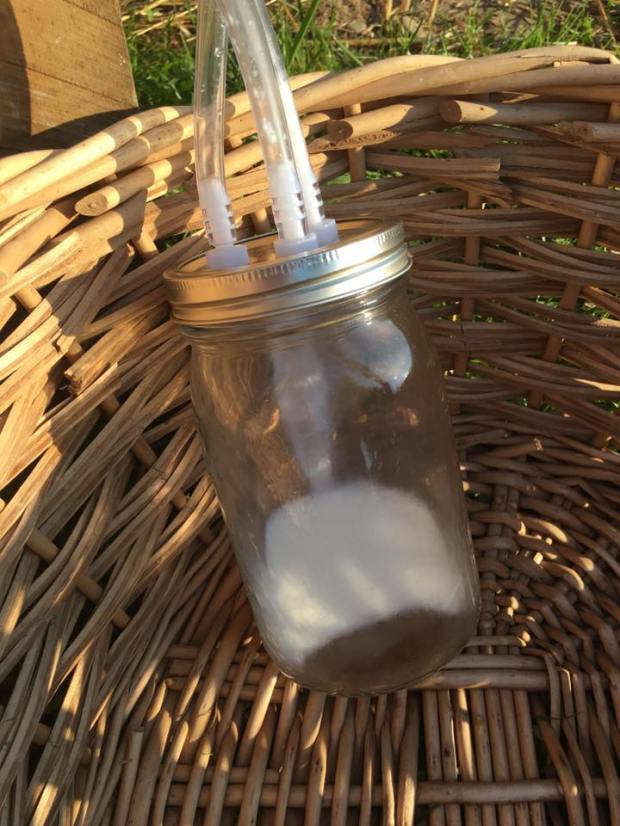 I thought it would take two days, but it took me two weeks of milking to get enough milk for a batch of soap. That was my one goal for the goat’s milk.  That’s usual for me though. I seem to have major disparities between my perception and reality. I frequently imagine things going much smoother than they do. I also frequently imagine myself doing far more things than I have time to do, or am physically able to do.  I truly hope my family laughs at me kindly.  Then after several weeks of attempting to milk the one goat, she dried up and stopped producing milk.  Just like that, done!  A year of effort, and I got 4 weeks of a result!  Again, par for my reality/perception difficulties.

Thankfully, after the several weeks of effort, the soap making endeavor commenced.  As is typical, we ended up figuring out the recipe on the fly, guessing whether it was right, and hoping we didn’t burn ourselves with the lye.  We ground of up oatmeal, sniffed some lavender oil, and measured out various oils.  It didn’t end up looking perfect, but it works well, and smells great.  At least we started, that’s my general goal with most things…start.  Perfection and refinement can come later, the joy in discovering new things is enough for me right now.

With my slight soap success, I felt that I had reached a point of contentment with the goat.  At least I got four weeks of milk out of her, at least I was able to do something small with her.  But then, last Friday, we got another surprise.  The ever pregnant goat, the one I’ve been expecting to deliver for 3 months, finally had a baby!  And just like that, my hope is once again restored in my ability to get goat’s milk.  Now if she would only cooperate and get up on the goat stand. 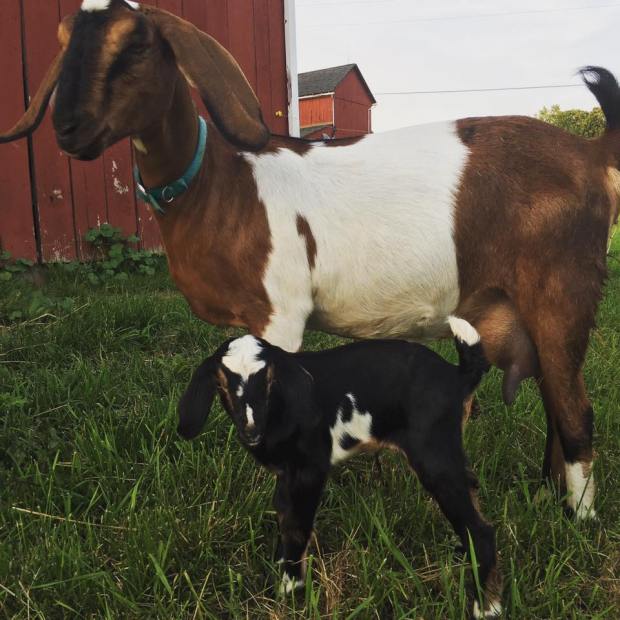 I must admit, farming is addictive.  My husband and I were laughing the other day over the first time I ordered chickens only 3 short years ago.  He wanted 3, I ordered 6.  Within a week, we adopted 4 more and had 10.  It felt overwhelming.  Yesterday’s shipments brought in another 210 birds to our already well populated poultry flock, and we know we could probably handle even more.  Yes, we’ve gone completely crazy.

But crazy might actually not be that weird any more.  As we fervently try to find the best, most natural practices for growing our food, we step back and wonder… Why isn’t everyone this “crazy”? I wouldn’t call us activists quite yet, but knowledge is powerful, and causes any rational thinking person to change their behaviors.  As we study the differences between conventional farming of today and historically organic, natural practices of a century ago, it is a mix of anger, sadness, and empowerment.  Anger, because we as a culture have lost touch with our food and the gift that it is.  Anger, because there are large companies out there that have genetically modified our food in a pursuit of a more “perfect” product.  Sadness, that so many people have so little education over what real food actually looks like.  Sadness, that people are more willing to spend money on soft drinks than vegetables.  Empowerment, because we know that we are committed to figuring out a better way.  Empowerment, because there is a small, but growing culture that wants to find a way to reconnect people to their food, and we are ecstatic to be a part of it.

Every day seems to bring a new awakening to us in how we manage our animals and plants. The boys built a mobile turkey tractor the other day entirely out of recycled items.  It’s ingenious.  Old lawnmower wheels that pop up, an old sign as the roof, and recycled wood from an auction.  It’s amazing how building something organically gives you so much joy.  They could have easily just purchased this tractor, or at least gone to the hardware store and bought all the parts for it.  But instead, with a little ingenuity and grit, they built this adorable structure that we are all immensely proud of. 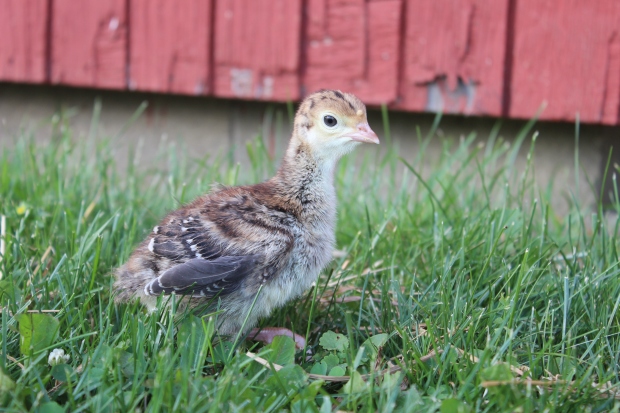 Today, we are on to a new learning adventure.  Plotting our next round of chicken processing, we are evaluating what we did last time that worked, and what could we do better this time.  We are so proud of the beautiful peaceful life these little birds have lived, so proud of the feed we’ve provided them, so proud that we didn’t have to mutilate them or treat them poorly during their lifetime.  I suppose some people think it would be easy to just go to the grocery store and buy a chicken breast, but at this point, we could never go back.  We know too much, have worked too hard, have enjoyed the taste difference too greatly.  We are completely committed to our chicken addiction. 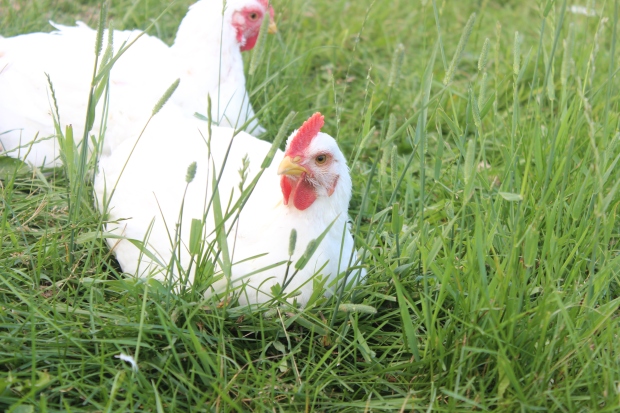 The Garden isn’t planted! Heck, the garden isn’t even plowed. Currently, there is 18 inches of grass where I envision rows of lettuce, squash, and beans to be growing. Considering that we have grown significant amounts of vegetables in prior years, this is quite the frustration for me. Memorial Day weekend has long been our major push for getting things in the ground. But here we are sitting squarely in June with a bunch of seedlings and no where to put them. Every day I come home and am reminded by what we haven’t been able to get done. I am frustrated by this failure.  It’s not like I have just been sitting around though.  We’ve all been busy readying all kinds of things around the farm, preparing for end of year school adventures, a graduation, a party.  We’ve been preparing for new chickens, new turkeys, a new cow, new pastures, new fencing.  We’ve been working our day jobs, running errands, driving children around.  But still, this patch of grass glares at me. 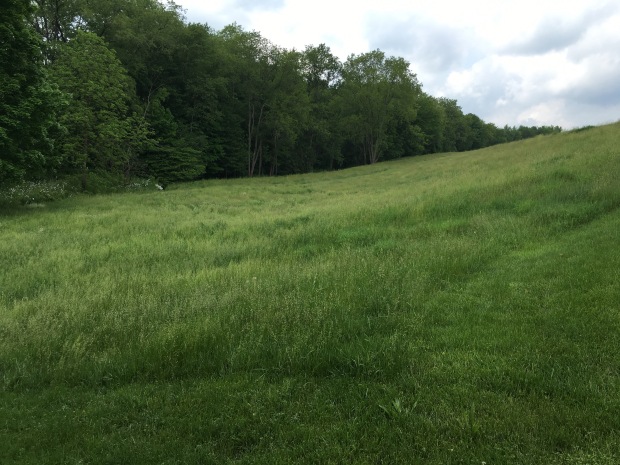 It’s so easy to focus on that patch of grass and get frustrated though. I don’t know why we are always so inclined to focus on the negatives. I find myself doing it often…”I didn’t have enough time to do this.”, “why are you not doing chores?”, “why did you forget to do that?”  The dont’s, the didn’ts, and the forgotten things seem to be the easiest to focus on, at least for me. Sometimes it’s saying these things to myself, silently beating myself up for failing in some way. Sometimes it’s toward my children, when I feel they aren’t living up to my standards or expectations.  Sometimes it’s towards me, because I frequently fall short of getting my to do list done and somewhere along the way I’ve forgotten something, or occasionally, someone.  Sometimes it’s justified, but mostly, it’s merely choosing to focus on the failure instead of the success.

As part of this ever changing journey, we are learning though.  Learning to be patient, learning there is always more work to be done, learning different ways to do what we already thought we knew.  We are also all learning to offer each other grace for our shortcomings.  After all, weren’t we all offered much more grace?  How can I not be thankful when I look at that patch of grass? At least I have it.  At least I will be able to grow food eventually.  How can I not be thankful when I see animals and children running around carelessly? At least they have enough food.  How can I not have pride when I look beyond that would-be garden at the open sky, rolling hills, green grass, and fresh air? I take a deep breath of that fresh air and it brings my focus back to what matters.

A family's pursuit of a sustainable life built on faith, family, & food